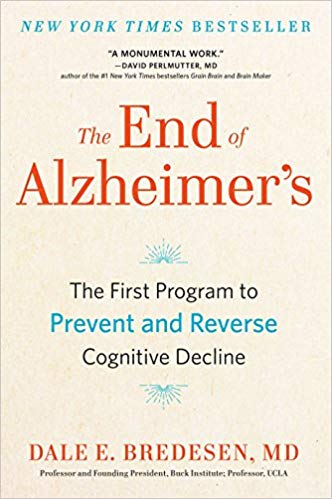 Alzheimer’s disease is the sixth-leading cause of death in the U.S. killing more people than breast cancer and prostate cancer combined. While there’s continual research to prevent and ultimately find a cure, Dr. Dale Bredesen developed an Alzheimer’s treatment that is helping hundreds of people with mild to moderate cognitive impairment that are experiencing never before seen improvements.

After 30 years of research, Dr. Bredesen is sharing his treatment in his new book titled, The End of Alzheimer’s, as well as in medical journals.  Dr. Bredesen says, there are 36 causes of Alzheimer’s which must all be addressed.

Increased occurrences of forgetfulness may be signs of early stages of Alzheimer’s which can be confirmed by a test.  An Alzheimer’s diagnosis is devastating news. Emotionally, that may include a total sense of hopelessness and even a desire to die.

“You don’t want to wait until it’s late in the game.  The earlier the better and the more likely you will experience dramatic improvement.”

Dr. Bredesen recommends everyone get a cognoscopy, blood work, genetic test and more to identify where you are when it comes to Alzheimer’s. Some patients test results revealed 36 causes of Alzheimer’s.

“All of us should get a cognoscopy when we get to 45 or more, just as we get a colonoscopy when we turn 50. Everybody knows that.  Each person’s program is different so we’ve developed a computerized algorithm so that you can look at all the different contributors for each person identified.”

What this means is tailored made treatments that zero in on where the patient needs improvement. For many patients this means taking certain medicines, vitamins and supplements, more sleep and less stress. Exercise and a proper diet like a Ketogenic diet for example will help you think clearer. Also eliminating exposure to certain toxins like molds and pesticides plays a big role in the restoration process.

“It takes typically 3 to 6 months, but we see unprecedented improvements in their scores, in their ability to go back to work, interact with their families and increases in their hippo-campus volumes.”

When it comes to sustainability, Dr. Bredesen says, people that have been in the program for 5 years now are still mentally fit.

Kathleen Smith, BSN,RN As a Registered Nurse for more than 40 years, I have my…